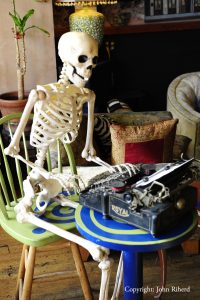 Okay. Here I go, writing a blog. Over time, I will write about whatever comes to mind. I plan to eventually throw in some video. There will be lots about writing and publishing because that’s what I’m trying to do in this, my second childhood. I will not be offering expert advice because I’m no expert. I will be sharing the experience. Of interest to others sharing the experience of writing and those interested in a behind the scene look at the experience, I’m going to try to blog the process of writing my next book. I won’t be disclosing any plot, but I’ll try to describe what I’m doing at the moment and how.

General blogs, like this one, are going to end up being as meandering as the mind of someone who enjoys being blessed with what the rest of the world calls ADD. Having ADD is like trying to watch a show on television, not knowing where the remote is but your puppy has dragged it under the table and has a paw on it so that the channel is changing and you cannot figure out how to stop it but you are still giving equal attention to everything as it pops on to the screen and your brain works like that almost full time.

Speaking of puppies—my puppy, Pip, is trying to jump in my lap hoping it will inspire me to take him to the dog park, but it is twenty-nine degrees outside and we aren’t going. He just made it to my lap and is licking my ear. Now, he is sniffing the desktop in search of crumbs of anything remotely edible, pausing to watch Grace Vanderwaal on the other screen. Pip loves to watch television. More about that in a later blog. (Now, he’s watching Mozart In The Jungle. He really likes classical music.)

Speaking of Grace Vanderwaal—she is a phenomenon. She rose to fame by winning Americas Got Talent when she was twelve. She did so by bucking the common wisdom of performing rousing covers of popular songs. She sang all originals. Her songs had smart lyrics that belied her age. Maybe her melodies contained a few musical tropes, but she put them together is smart ways, creating melodies that can get stuck in your head.

Vanderwaal’s voice was, in the words of Simon Cowell, croaky and raw. She’s expanded her talent and, now, her voice smooths out when appropriate. She is one of those pop singers who play with the sounds of her vowels so that their unique sounds become a part of the music. She does not approach perfect pitch like Mariah Carey or Freddie Mercury, or the best of my high school generation, Karen Carpenter, but some of the most engaging singers are not the best at hitting perfect notes. That puts her in the class of Bob Dylan and Joe Cocker. The second best thing about dating girls from my high school’s choir was that they sang in tune with the radio.

An aside: Some singers depend on AutoTune. Another thing Simon Cowell said was that Vanderwall is the “next Taylor Swift.” No. The talent Grace is showing would not depend on AutoTune like Taylor Swift. Although she’s still exploring her musical options, Vanderwaal leans toward a more folksy pop sound than does Swift. Like her or not, Swift is a terrific songwriter and brilliant about her market. Vanderwaal, too, is brilliant and carving her own path as she explores several musical possibilities. I like what one reviewer said about Vanderwaal: She throws herself into the lyrics with the fearless enthusiasm of a thirteen-year-old. And she does so oblivious to the risks.

It’s been fun (As I typed fun and some other words up there it is becoming evident that the “f” on the keyboard is having issues. That can uck me up)…It’s been fun watching Grace move from the gutsy, nervous twelve years old auditioning on AGT to the more and more composed performer in charge of her future who is, so far, doing a great job.

That concert video is over and I’m going to go make breakfast, chili and eggs. One thing we will not do in this blog is debate whether or not chili should have beans. That controversy was created as a public relations ploy to hype the first chili cook-off between Wick Fowler and H. Allen Smith. Chili is meant to be eaten, not debated. Use them like me or don’t, but I don’t want to argue about it. I want to eat it.

Speaking of chili and eggs—chili and eggs was the first breakfast I had in my married life. My lovely bride Jan has often said, “That should have been a clue.” It was served in the hotel in Odessa we stayed on the first night of our married life on the way to Indian Lodge at the Fort Davis State Park. Yeah, I know, not a fancy honeymoon, but I was nineteen and paid for it myself. We were so determined to not ask parents for help. Or, I guess, to ask as little as possible. We did get lots of help. But, I did pay for that honeymoon. Other than that first night’s stay along with the champagne in the “honeymoon suite” of the hotel. Her parents paid for that. Oh, and we borrowed my mom’s car and it was full of gas.

About that champagne—we shared some in a bubble bath in the huge tub in the room and another glass after said relaxing bubble bath. I re-corked the bottle. Eventually, we went to sleep. At some point, I woke up suddenly. The first thought in my head was, “Dumb ass. You put the cork back in a half-empty bottle of champagne.” I lay there for two or three minutes and, sure enough, bam! the cork shot out of the bottle, bounced off the ceiling and a wall, ending up in a potted plant. I woke Jan up laughing. I should go back and see if the dent is still in the ceiling.

About borrowing my mom’s car—to those of you, whoever you were, who filled my car with weeds and dumped salad dressing all over the interior during our wedding reception at the country club: Jokes on you. I never saw it. My dad cleaned it all up before we got home. Sorry. He told me I had some not-so-nice friends.  (I have an uncle who, as a very young boy, tried to help out another family member on his wedding day. My uncle filled the newlywed’s gas tank the morning of the wedding. He filled it with the water hose.)

About champagne corks—years after our first champagne cork experience as a married couple, at a time we lived in The Woodlands north of Houston, I took Jan out for a special birthday dinner. I’d made reservations at a fancy steak place we’d been wanting to try. My parents were in town and went with us. I’d actually put together a mini-surprise party and had friends waiting for us at the restaurant. We were running late for some reason I don’t remember, but I’m sure it was my fault. Trying to get there before cell phones had GPS (In fact, I might have not yet owned my first cell phone.) … trying to get to the steak place, I turned left off of FM 1960 in Houston instead of right. Jan was already … hmm … not really bitchy, but, let’s say, tired of running late. When I had trouble finding the place she started strongly suggesting we just go somewhere else. I couldn’t do that of course, others were waiting for us.

Finally, I got us to where we were going and my lovely bride’s running review of my performance stopped and turned joyful at finding friends, a birthday balloon, and champagne awaiting our arrival. The service person came to open the champagne. Perhaps she needed a tad more training in removing the cork from champagne. It popped off loudly, shot across to the table next to us and hit a lady’s water goblet square on. The goblet broke and water exploded across the table. That table got a free bottle of wine.

Speaking of cell phones—through our son’s Boy Scout Troop, we were friends with a family in which the father was the General Counsel of GTE Mobilnet, one of the first, if not the first, cell phone companies in Houston. The first cell phone I ever saw was one he brought to the Astrodome when our two families went to a game. The phone consisted of a headset connected to a pretty big box you had to lug around. At the game, we had two sets of four tickets. We, the parents, had four seats behind the third base line. The kids were in four seats behind the first base line. We had one clunky cell phone. The kids had another.

We called the kids. It was interesting. From across the field, we could see exactly where the kids were sitting. When they answered the ringing phone rang on the other side of the stadium, everybody around them leaned it to get a look at the phone. They were at a vortex of people on their row and on three or four rows in front and behind them. All those people leaned in. Those farther away stood up and leaned it to get a better look. From where we were, it looked a whirlpool of people centered on the kids. Kind of cool.

Now, on to breakfast. And coffee. In the future, there will undoubtedly be blogs about coffee. And whiskey. And coffee shops. And pencils. And grammar and language. And other things important to the process and image of being a writer. And some blogs about photography. And kids. And perfect grand kids. And Pip, the pup. Because: “Telle est la vie et la vie est tour ce que nous nous avons.” (Don’t you just love how the internet can make you sound all pompously erudite?)